Perfect Time to Reshape the Golden Triangle in British Columbia 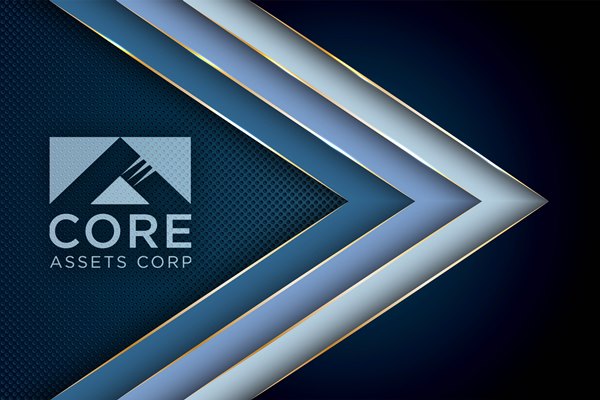 Today at market open in Canada, the shares of Core Assets Corp. are expected to commence trading on the CSE under the symbol “CC“. As management and insiders control over 60% of the 21.2 million issued shares under an Escrow Agreement, a tight shareholder structure has been created with no warrants or options currently outstanding. With its Blue Property near Atlin in north-western British Columbia, Core Assets is on a mission to delineate a gold-silver-copper skarn and/or porphyry deposit similar to those found in the prolific Golden Triangle exploration and mining region.

Gold and copper prices are on fire, and investors are pouring loads of money into one of the world‘s hottest mining plays: British Columbia‘s Golden Triangle.

Many of the world‘s largest gold, silver and copper deposits have been found in the Golden Triangle, however due to a combination of factors (e.g. low gold prices and a lack of infrastructure), the region was laying dormant for a while.

Since March 2020, the USD prices for gold and copper have soared by 30% and 40%, respectively, during which time over $80 million CAD of capital was raised for advancing projects in the Golden Triangle. The sleepy days are over, the hotbed for mineral discoveries and riches is readily awake now and at the center of investors‘ attention.

Despite over 130 million ounces of gold, 800 million ounces of silver and 40 billion pounds of copper already found in Golden Triangle‘s rugged terrain, significant discovery potential remains. With glacial ice and snow retreating in many parts of the region, new geological explanations and modern exploration methods are paving the way for new discoveries in the making.

The gold rush in the Golden Triangle has already started, with dozens of companies actively exploring projects to create shareholder value and to refine the boundaries of the triangle. 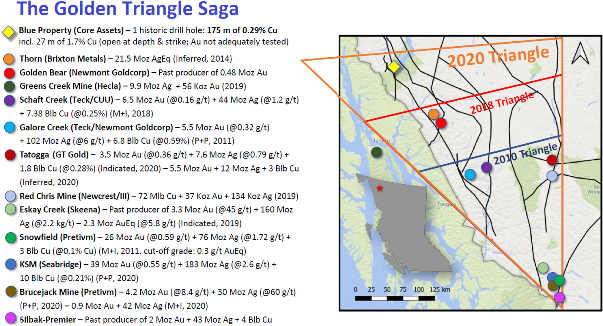 Full size / Select exploration, development and mining projects in the “Golden Triangles“ of British Columbia (Greens Creek Mine located in Alaska). Above stated numbers may be rounded, from companies‘ public disclosure (Koz = thousand ounces; Moz = million ounces; Blb = billion pounds; Eq = Equivalent; M+I = Measured & Indicated Resources; P+P = Proven & Probable Reserves). Note that results of above stated past producers, active mines, exploration and development projects in the region are not necessarily indicative of the potential of the Blue Property and should not be understood or interpreted to mean that similar results will be obtained from the Blue Property. The historical information in reference to the drill hole (1973) on the Blue Property from Core Assets Corp. is relevant only as an indication that some mineralization occurs on the Blue Property, and no resources, reserve or estimate is inferred. A qualified person has not done sufficient work to classify the historical information as current mineral resources or mineral reserves; and neither Rockstone nor Core Assets Corp. is treating the historical information as current mineral resources or mineral reserves.

The Blue Property has undergone some historical exploration programs in the past, focusing mainly on the copper-gold-silver mineralization in skarns. 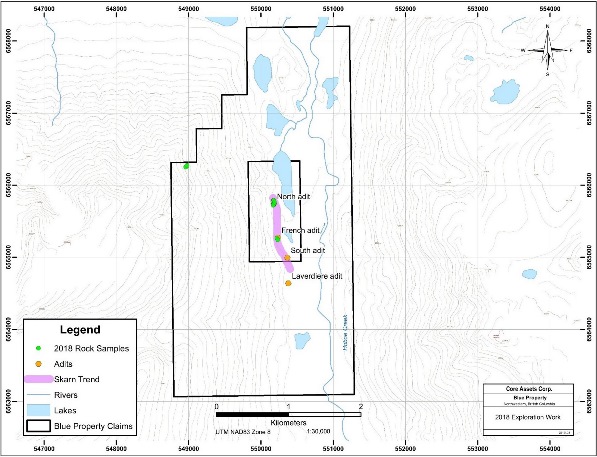 “In 1973 Rio Plata Silver Mines Ltd. commenced diamond drilling on the property yielding 175.0 meters of 0.27% copper from surface, including 27.0 meters of 1.2% Cu approximately 15 meters south of the “French Adit.” (Source)

“The historic French adit, which is still accessible, transects a magnetite skarn and truncates approximately 47 m from its portal against the granodiorite...Historic drilling on the Blue Property, conducted by Rio Plata Silver Mines Ltd. in 1973, also encountered copper mineralization in DDH 2-73, that Fustos (1974), describes as “porphyry type”... The well-fractured and moderately altered granitic rock of DDH 2-73 from 0 to 175.4 m, had an average copper grade of 0.27%; scheelite was also observed... Rio conducted a 176 line-kilometer aeromagnetic survey between August 6 to August 8, 1973. The aeromagnetic survey indicated a new area of skarn mineralization and two areas of possible porphyry mineralization (Nielsen and Phelps, 1973).” (Source: Technical Report on the Blue Property, 09/2019)

Full size / Mineralized talus below an outcrop exposure (found during the 2018 exploration program which “confirmed the copper, silver, and gold mineralization potential of the Blue Property.”) (Source) 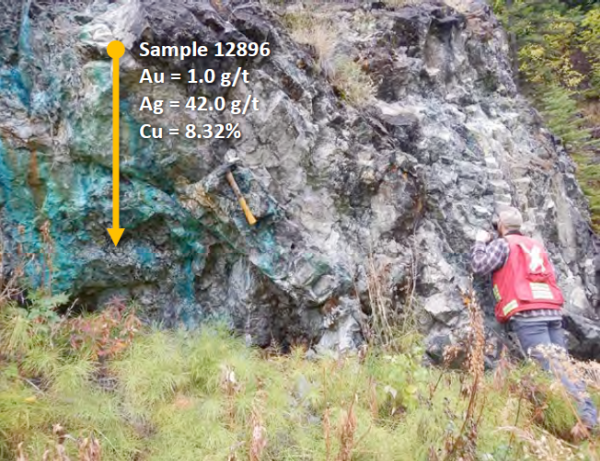 According to the Technical Report on the Blue Property (09/2019):

“Mineralized Zones: Mineralization on the Blue Property is hosted by a magnetite skarn with the principal observed ore minerals represented by magnetite and iron-copper sulphides; these are accompanied by variable amounts of gold and silver based on assay values.

”Deposit Types: The Au-Ag-Cu mineralization of the Blue Property is hosted by an Fe (Cu) classed skarn known as the Laverdiere prospect (Ray, 1997). Fe skarns are characteristically controlled by pluton margins, stratigraphic contacts, and local structures (Ray, 2013). Morphologically, Fe classed skarns typically occur as sheets, massive lenses, or stratiform bodies... There are at approximately 735 skarn occurrences in British Columbia and of these roughly 146 of them are classed as Fe skarns. Tectonically, Fe skarns are associated with rifted continental margins, synorogenic continental margins, and island arcs. While many skarns are barren, it is also possible for them to contain significant quantities of economic minerals such as Au, Sn, Fe, Cu, Mo and W. (Ray, 2013)... Ore mineralogy in Fe skarn deposits is characterized by magnetite with subordinate minerals including but not limited to chalcopyrite, pyrite, cobaltite, pyrrhotite, arsenopyrite, sphalerite, galena, molybdenite, bornite, hematite, martite, and gold... A proxy for porphyry systems is a spatially and genetically associated volume of hydrothermally altered/mineralized rock, like magnetite skarns. Porphyrys vary in size from relatively small systems consisting of a few million tonnes, to giants of a few billion tonnes; mineralization in these types of systems usually occurs as vein stockworks that host disseminated sulphides of copper, like chalcopyrite, and may have accompanying tungstates, like scheelite. Cu grades in porphyry systems commonly grade from 0.2% to 2%.“

Full size / Visible bornite (Cu5FeS4) in magnetite-rich limestone collected in 2018 from outside the “French Adit” on the Blue Property. The striking iridescence of blue to purple tarnish gives bornite its nickname “Peacock Ore“. (Source)

Full size / Malachite (Cu2[(OH)2|CO3]) rind on weathered surface of an outcrop on the Blue Property. (Source)

Work completed by Core Assets to date on the Blue Property consists of a 2D resistivity/induced polarization geophysical survey over a portion of the property in June 2019.

According to the Technical Report on the Blue Property (09/2019):

“[...] additional anomalous zones of high chargeability and low resistivity occurring approximately 150 m below the modeled topography have been identified... The 2019 resistivity/induced polarization, geophysical survey successfully confirmed the ability to detect skarn mineralization at depth based on the known surface extents and historic drill logs. Additionally, the survey identified moderate chargeability anomalies up the hillside to the west of Hoboe Creek that can be drill tested... this area has mapped exposures of granitic rocks and therefore are considered to be porphyry style mineralization targets, similar to the mineralization recorded in historical DDH 2-73.“ 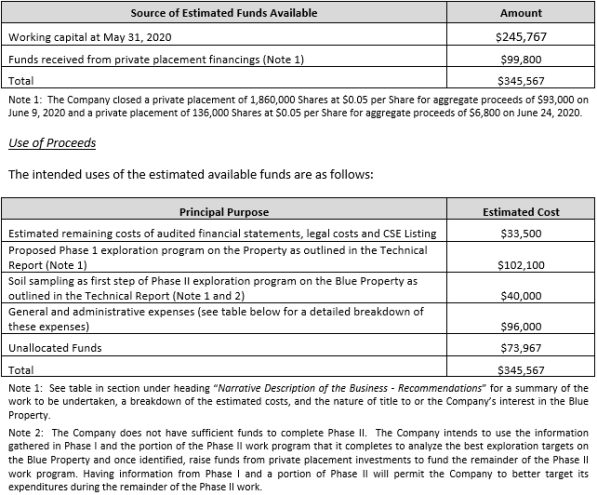 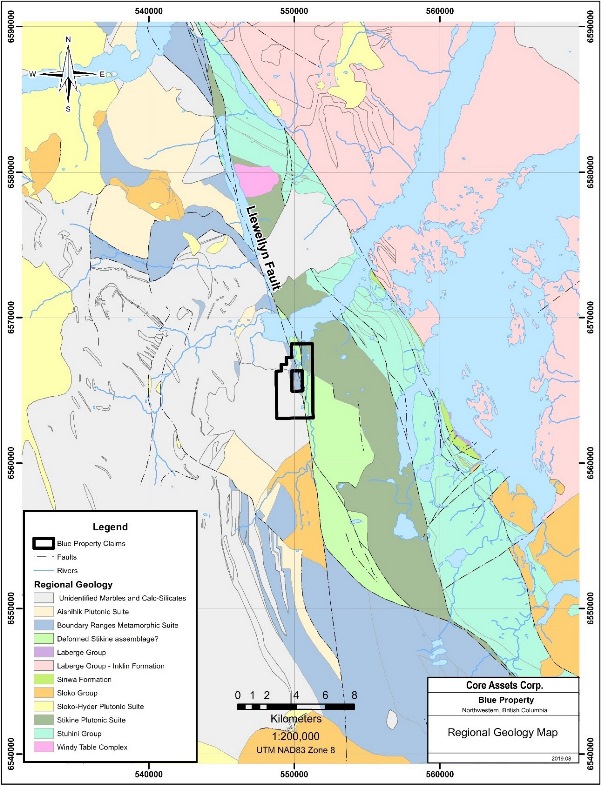 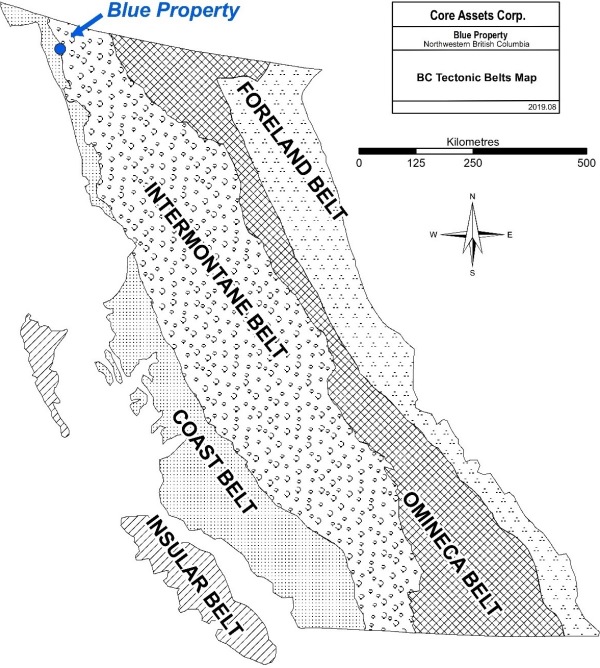 “A major regional structure, the Llewellyn fault, juxtaposes the Nisling terrane, a Proterozoic to lower Paleozoic aged continental margin assemblage (west), against the Upper Triassic to Middle Jurassic northern Stikine terrane (east)... The Llwellyn fault exceeds 100 km in length, striking northwest from the Tulsequah area to the British Columbia-Yukon border. It is characterized as a steeply dipping, brittle dextral strike-slip structure (Mihalynuk et al., 1994, 1999)... In this area, the Stikine terrane is comprised of Upper Triassic strata belonging to the Stuhini Group; this group consists of limestones, arkosic sandstone, basaltic flows and breccia, debris-flow conglomerate, turbiditic volcanic sandstone, and argillite (Bultman, 1979; Milhalynuk and Mountjoy, 1990). The northwestern part of the Stikine terrane is an exceptionally prolific area for economic ore deposits and has been dubbed “The Golden Triangle”. The rocks of this area are known to host volcanogenic massive sulphide, alkaline porphyry Cu-Au, and epithermal precious metal deposits.

”Exposures of lithologies belonging to the Stuhini Group are poorly represented on the Property, dominantly occurring along its eastern or northern borders. The lowermost unit of the Stuhini Group, east of the Llwellyn fault zone, is a sheared, brecciated, and locally calcite veined basalt. Intrusive granitic units on the Blue Property are comprised of biotite granite to granodiorite and biotite-hornblende granite to alaskite. These granitic intrusions dominantly span a temporal range from the Late Triassic to the Mid-Cretaceous, though younger intrusives of smaller relative volumes occur throughout the area (Jackson et al., 1990).

”The Blue Property straddles the eastern boundary of the Coast Belt and the western boundary of the Intermontane Belt ... along the Hoboe Creek Valley in the Canadian Cordillera... The Coast Belt is comprised of mainly granitic rock spanning a Jurassic through Cenozoic temporal range. The remainder of the Coast Belt are Proterozoic, at the latest, to Holocene complexly deformed, high grade metamorphic sedimentary and volcanic rocks formed in magmatic arcs or accretionary complexes (Monger and Price, 2002). The Intermontane Belt in northwestern British Columbia is represented by the Stikine physiographic unit. Sedimentary, granitic, and volcanic rocks geologically define the Intermontane Belt spanning the following facies and temporal ranges: Devonian to Early Jurassic island arcs and accretionary complexes; Middle Jurassic to Cenozoic continental arc, marine, and terrestrial clastics; Devonian to Cenozoic granitic rocks (Monger and Price, 2002).” (Source: Technical Report on the Blue Property, 09/2019) 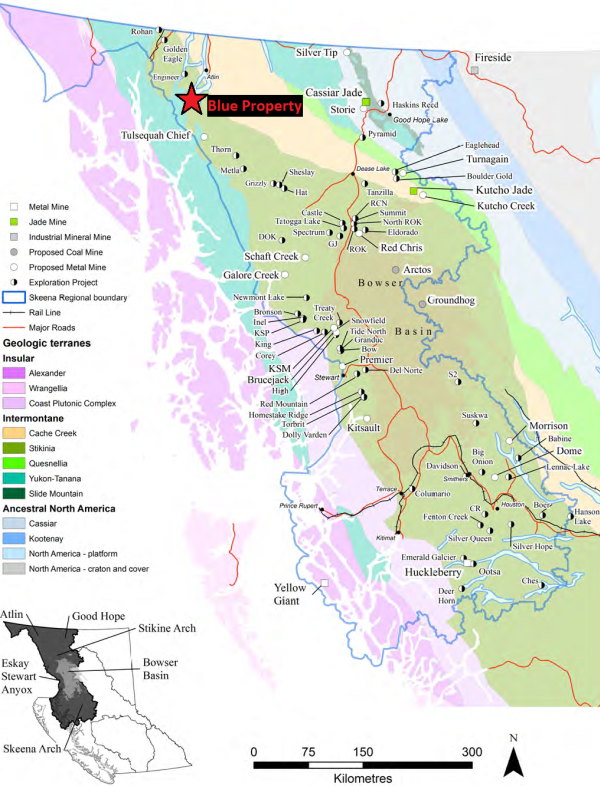 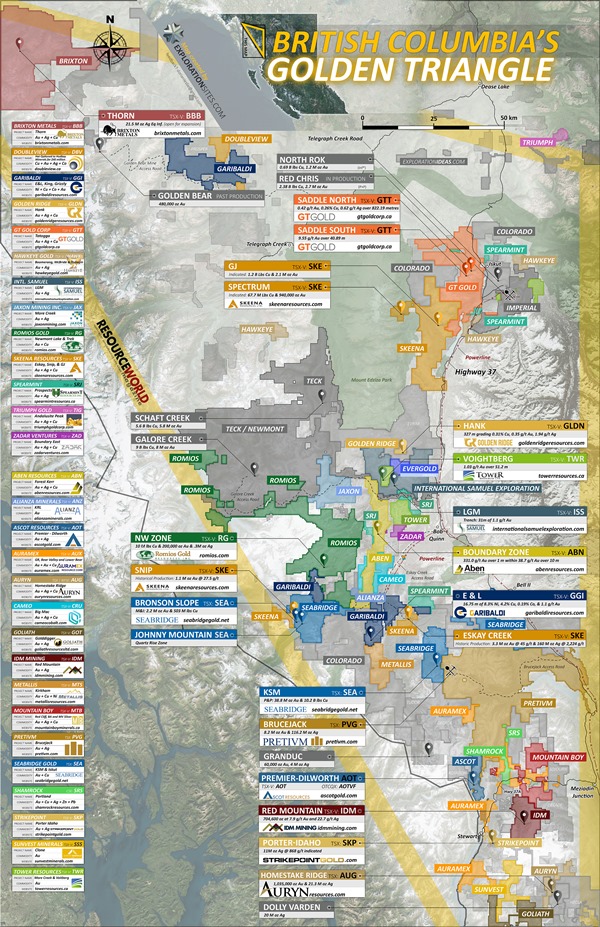 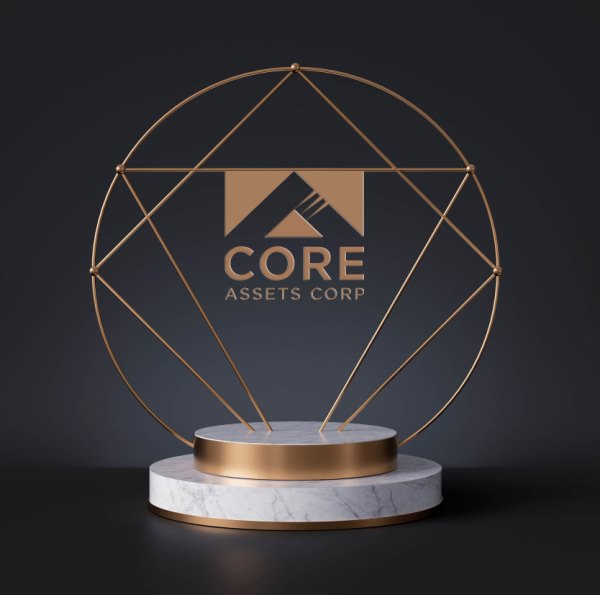 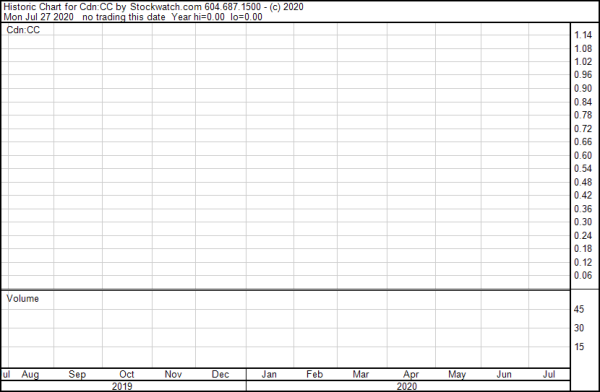