VANCOUVER, BC / ACCESSWIRE / November 13, 2018 / Ximen Mining Corp. (TSX-V: XIM) (FRA: 1XMA) (OTCQB: XXMMF) (the "Company" or "Ximen") is pleased to announce that the investor sentiment at the International Precious Metals & Commodities Show in Munich was positive. As a result, the company has decided to accept opportunities to present in various cities throughout Europe over the upcoming months. Invitations that were extended to the company during the show this past weekend are being accepted.

Prior to the PDAC in March 2019, the company is planning over the next few months to expand its road show throughout Germany into Frankfurt, Hamburg, and Berlin. Furthermore, Ximen will be accepting invitations to present in Switzerland, Austria, and the United Kingdom including Zurich, Geneva, Vienna, and London.

Over the coming winter months, the company will be continuing with its permitting activities in Southern BC for underground drilling and development at the Brett Epithermal Gold Project. In addition, the company is addressing some other synergetic opportunities that could possibly arise as a result of current market conditions. 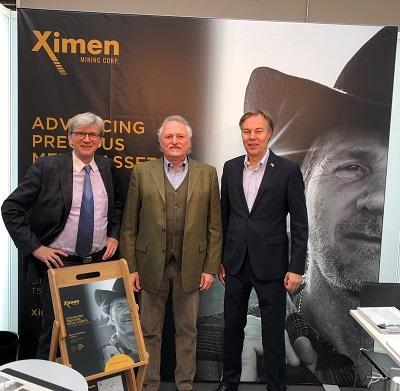 If you are interested in learning more about Ximen mining and its activities in the precious metals space in southern BC Canada, please contact the company and we would be happy to make time to personally introduce you to the company and its plans going forward.